The formation of White Light began back in 1971 at Roosevelt High School. Members of Roosevelt’s pumping Stage Band and Concert Band got together as friends who enjoyed listening and playing music from funky rock bands like Tower of Power, Cold Blood, Blood, Sweat, and Tears, Chicago, and Earth, Wind and Fire to name a few.

One night, while gazing up at the starry sky after rehearsal at Kawananakoa band room, the guys decided to hunt for a name for the band. Guitarist George Mosier was working on some new licks from the song Stairway to Heaven when they decided to check the lyrics of to see if they could get some ideas. As they came to the bridge of the song, Arex Ikehara spotted the line ...who shines “White Light” on ones that show... and the rest is history.

Don Tsuha (trumpet), Sherman Kang (sax), and Clarence Lau (trombone) filled the brass section with Gerald Tomosawa doubling on trumpet and drums. Layne Maeoka was the primary drummer who played everything else. With Arex on bass, Daniel Kurose and George on guitar, Larry Isobe on keyboards and Howard Nakata on vocals, this band was sure to erupt.

Dance after dance, at high schools and colleges... it was now time to hook up with Hawaii Booking Service. By this time, in 1973, White Light was rehearsing at Daniel’s shop in Kaka`ako. Tommy Kamisato (trumpet) and Joy Kamisato (vocals) entered as the band got their start in the nightclubs.

Remember the Magic Mushroom? $10.00 - ALL YOU CAN DRINK... and we were of legal age in those days at 18 years old! Now that’s dangerous. Soon, White Light was playing the Spencecliff circuit as an off-night band at the Hawaiian Hut on Sundays, Hula Hut on Mondays, Tiki Broiler on Tuesdays, Beef n’ Grog on Wednesdays, and the Magic Mushroom on Fridays and Saturdays.

In no time, White Light became the house band for a little over two years at the Tiki Broiler. After the Tiki, they took over as the house band at Hawaiian Hut.

Many a musician has come and gone through White Light. There is still a ghost band that plays as White Light to this day.

The reformation of White Light is quite enjoyable and exciting. Some have continued in the entertainment profession, some are part-time musicians, others are music hobbyists while still others have never picked up their instrument since.

This reunion event is giving us the opportunity to relight our friendships as well as realize the talent and unforgettable experiences that took place some 30 years ago.

It's important to stay true to your roots. See us perform live at our next gig. 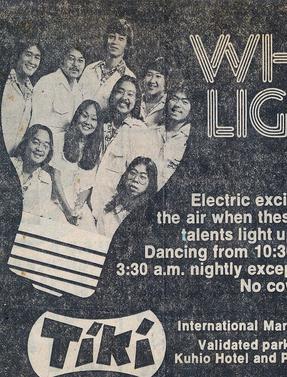